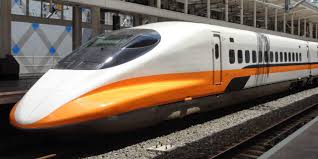 Taiwan High Speed Rail gets up to speed with a Motorola TETRA system.

BACKGROUND Taiwan’s reputation as an Asian dragon sums up the country’s affluence and economic success. The rise in living standards has also generated higher expectations from the community. For the transportation industry, commuter expectations for better transportation now go beyond safety and efficiency to include comfort. The country’s transport planners realised early that its railways were a vital economic lifeline that had to be upgraded. The rail industry had to be ‘brought up to speed’ to play an integral role in the country’s national development. For the first time, Taiwan High Speed Rail made it possible for commuters to travel in comfort between the cities of Taipei and Kaohsiung in roughly 90 minutes. As a result of this significant reduction in traveling time, the cities in the western corridor of Taiwan became a one-day community. Key to operational efficiency in rail transportation was the transport operator’s communications system. Taiwan High Speed Rail selected the TETRA digital communications platform to be implemented over its entire 345 kilometer track including tunnels, train stations and depots. The trainborne equipment had to also work optimally under high-speed conditions of over 300 km/h. Motorola was selected as the partner-of-choice for its strong TETRA delivery track record. Toshiba Corporation, a consortium member of Taiwan Shinkansen Corporation and the main contractor for the project, decided that Motorola, with its strong leadership in digital communications for the rail industry, was the ideal partner for the project. Motorola was awarded a multi-million dollar contract to provide a digital communications system for the Taiwan High Speed Rail Corporation.

There are 10 consoles in Taoyuan Operation ControlCenter, two consoles in each of the eight Station Control Rooms and another two consoles in each of the five Depot Control Rooms. Motorola's Dimetra system will address all of Taiwan High Speed Rail's operational and functional requirements – providing seamless voice and data services that will enable the Taiwan High Speed Rail to benefit from enhanced communication reliability and clarity, resulting in better control and management of its daily operations. The railway's dispatchers and train service controllers will use the new technology to better coordinate and monitor passenger train fleets, maintenance personnel and equipment. This will ensure that the trains arrive on time as scheduled and enhance the safety of the passengers. Motorola's TETRA system will also integrate computer-aided dispatch technology with failure monitoring and alarm reporting, a move that will make dispatch operations for passenger trains and maintenance vehicles more efficient, more reliable, and safe.