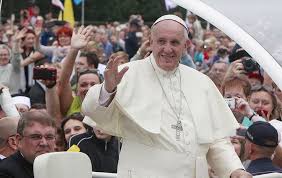 Volunteers played a major role in the Papal visit. The Civil Defence, Order of Malta , Irish Red Cross and St Johns Ambulance were all involved on the ground in both the Phoenix Park and Knock supporting the Principal  Response Agencies An Garda Siochana and the National Ambulance Services.

The main role of the Civil Defence was in assisting  the Gardaí in terms of safety and stewarding at the event, but volunteers were also involved in supporting the National Ambulance Service alongside  the 3 other supporting Voluntary Ambulance services, Order of Malta , Irish Red Cross and St John’s Ambulance .

Volunteers across the county joined forces and gave up their time for duty from Saturday night right through to Sunday evening. Operations ran smoothly across all agencies and were coordinated by 2 control rooms, one from Event Control at St. Mary’s Hospital in the Phoenix Park and the other from the National Ambulance Service , National Emergency Operations Centre (NEOC)  head quarters in Tallaght.

The TETRA network is ideal in servicing such a large scale event.  Operations teams were tasked with the safety of an estimated 200,000 people and the Pope who gave a Mass to close the World Meeting of Families.

The TETRA network was utilized by all primary and supporting agencies for the event to ensure efficient communications between all volunteers and  the Gardaí and National Ambulance Service if required.  Our flexibility of service allows for Dynamic Group Number Assignment (DGNA). This allowed all agencies to create unique user groups on demand for the special event and to meet particular needs throughout the event, such as incident communications.

See our case study on other state events